Our first full day of streaming at Duxford was like running a marathon the day after doing a 5K—both involve running, but one takes a whole helluva lot more effort and energy to complete. Of course, unlike marathons (to me, at least), our full day of livestreaming nearly eight straight hours of content was fun. A whole lot of fun. All we knew going into the day was that we wanted to talk to as many C-47 aircrews as possible, along with capturing as much as we could of the planes in flight. There were other aircraft gathered there, too—mainly fighter planes like Spitfires and the odd Mustang or Thunderbolt—so we guessed we’d be filming a number of aerial flybys and stunts. There was only one slight issue…

…. We had no idea when or how any of those things would come together for us. We had a few connections to the aircrews of a couple of planes, but as they were all at Duxford to coordinate the flyovers and parachute jumps in Normandy later in the week, we had no way of knowing if or when they might be available. To complicate matters further, this was such a high-profile event that the world’s largest television networks were all on hand, also looking for access to the flight line beyond the taxiway perimeter fences and for soundbites from aircrews. There were no guarantees we could out-muscle them for access. It was intimidating, to say the least. But, as it turned out, we had a secret weapon that the BBC, CNN, NBC, and the other networks didn’t have—an ace in the hole, a genie in a bottle, a force of nature, a secret weapon…

…. They didn’t have Julia Cannell, founder and CEO of VECTORS, the educational nonprofit putting on the VFT, the brainchild of this entire crazy enterprise that had us leaving perfectly fine day jobs in the States to run around filming airplanes and talking history. Julia, by default, ended up becoming our “wrangler,” the person who always moved two or three steps ahead of the rest of the team looking for individuals to interview, aircrews to approach, airfield workers to cajole into letting us out to the flight line, and any other interesting connections for us to pursue. Julia proved uniquely suited to the role, especially in this setting—she loves and knows airplanes, especially the DC-3 (she will talk your ear off about how it is the greatest airplane ever designed, and she’s got a strong case. Trust me.). Her enthusiasm and knowledge endear her to pilots and other aviation-geeks, and she doesn’t take “no” for an answer. That was exactly what we needed, and time after time on this day and every subsequent one during the VFT, she delivered one incredible opportunity after another, each one seemingly cooler than the last. We are still taking nominations on the appropriate “call sign” for her based on the utter magic she conjured up on this trip– the current leaders are “Voodoo”, “Houdini,” and “Dumbledore.” 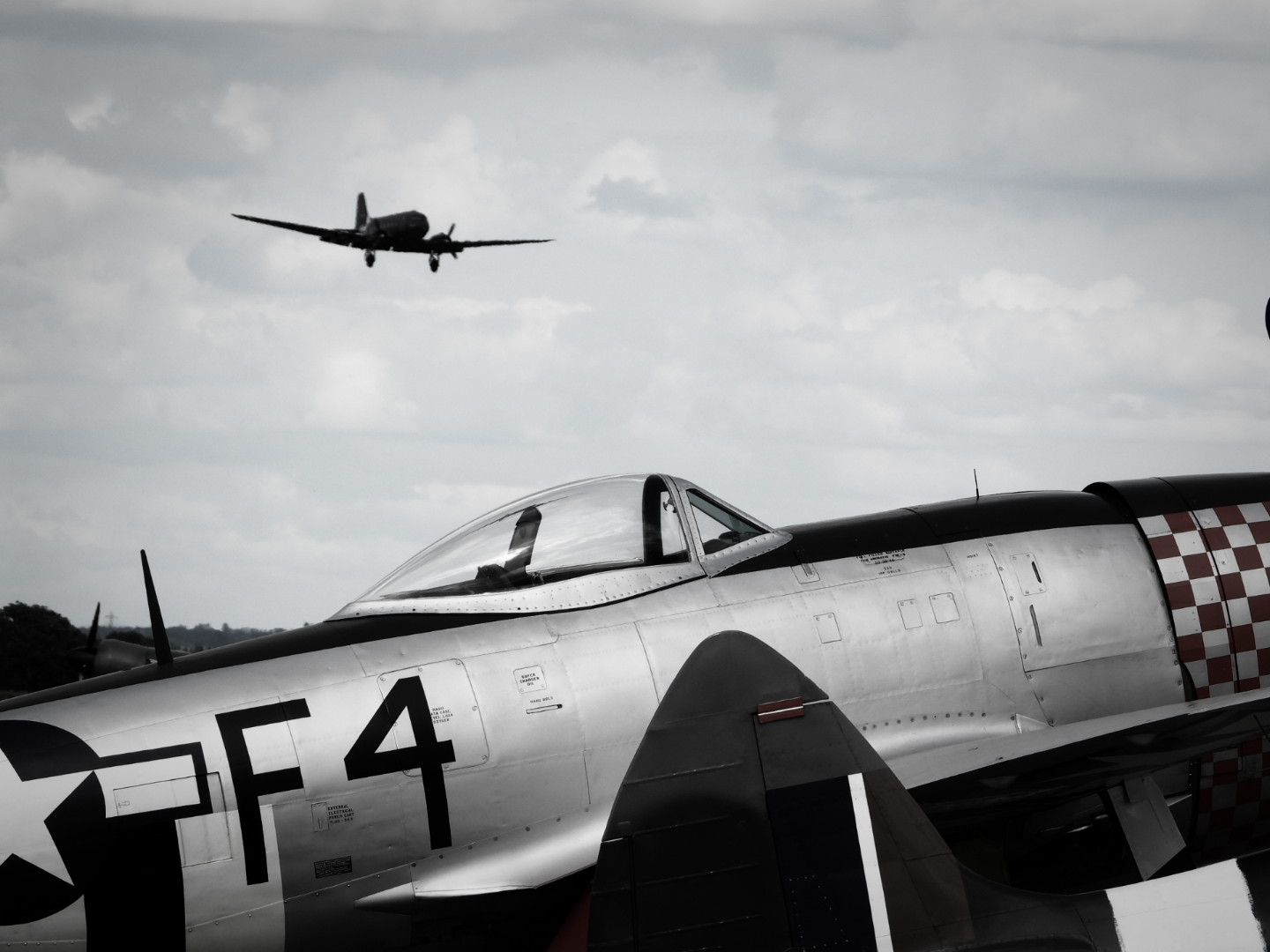 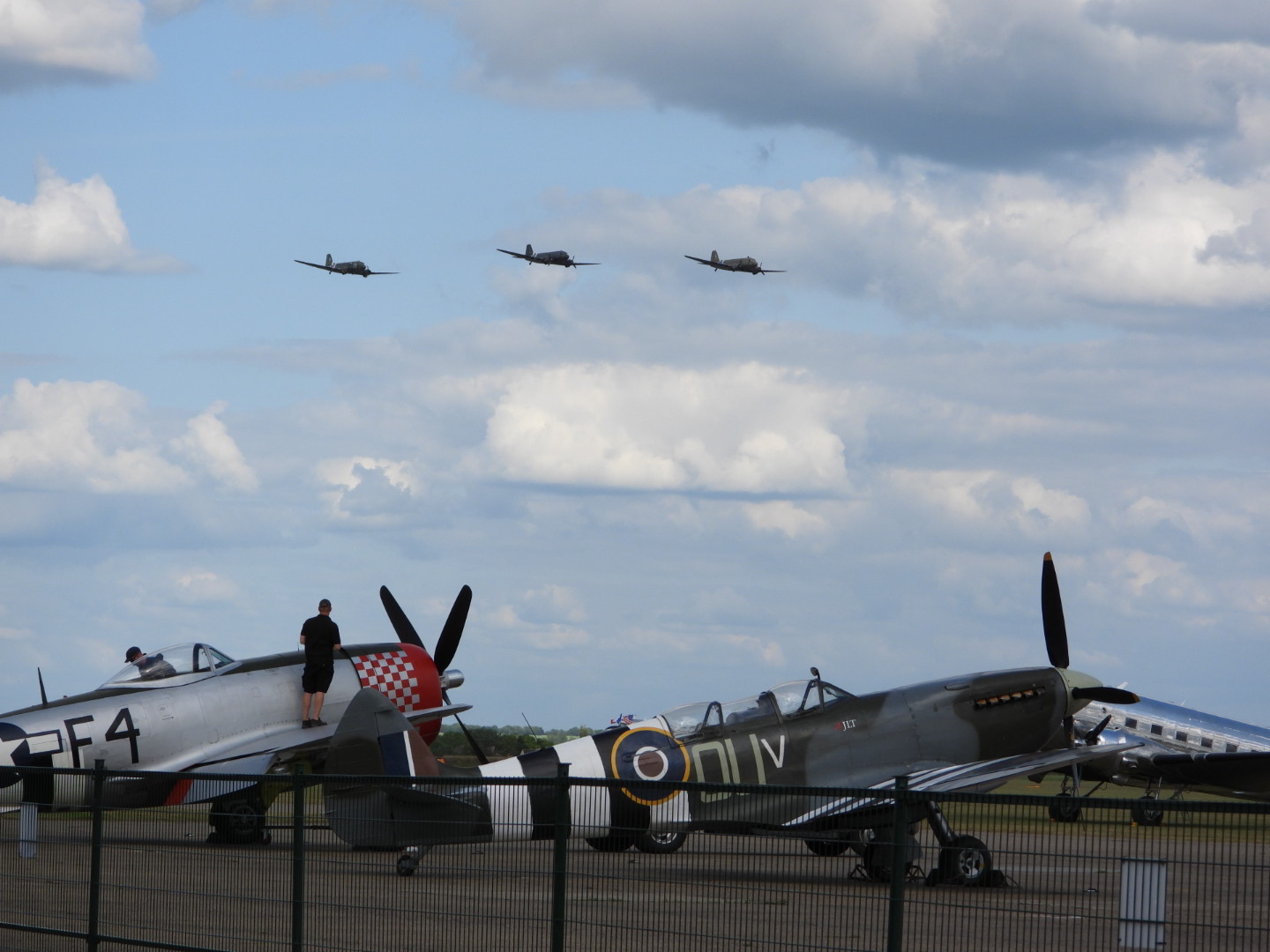 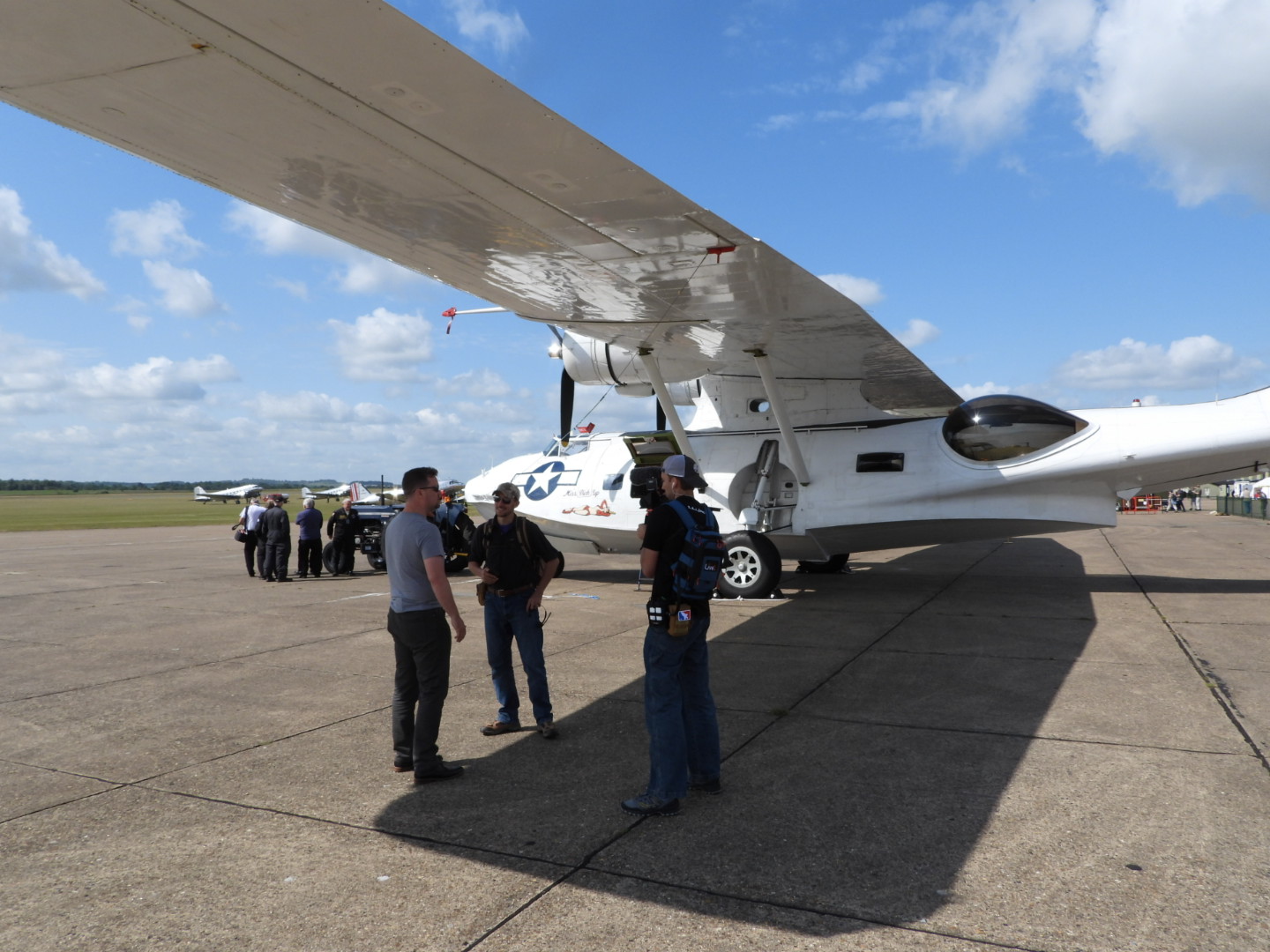 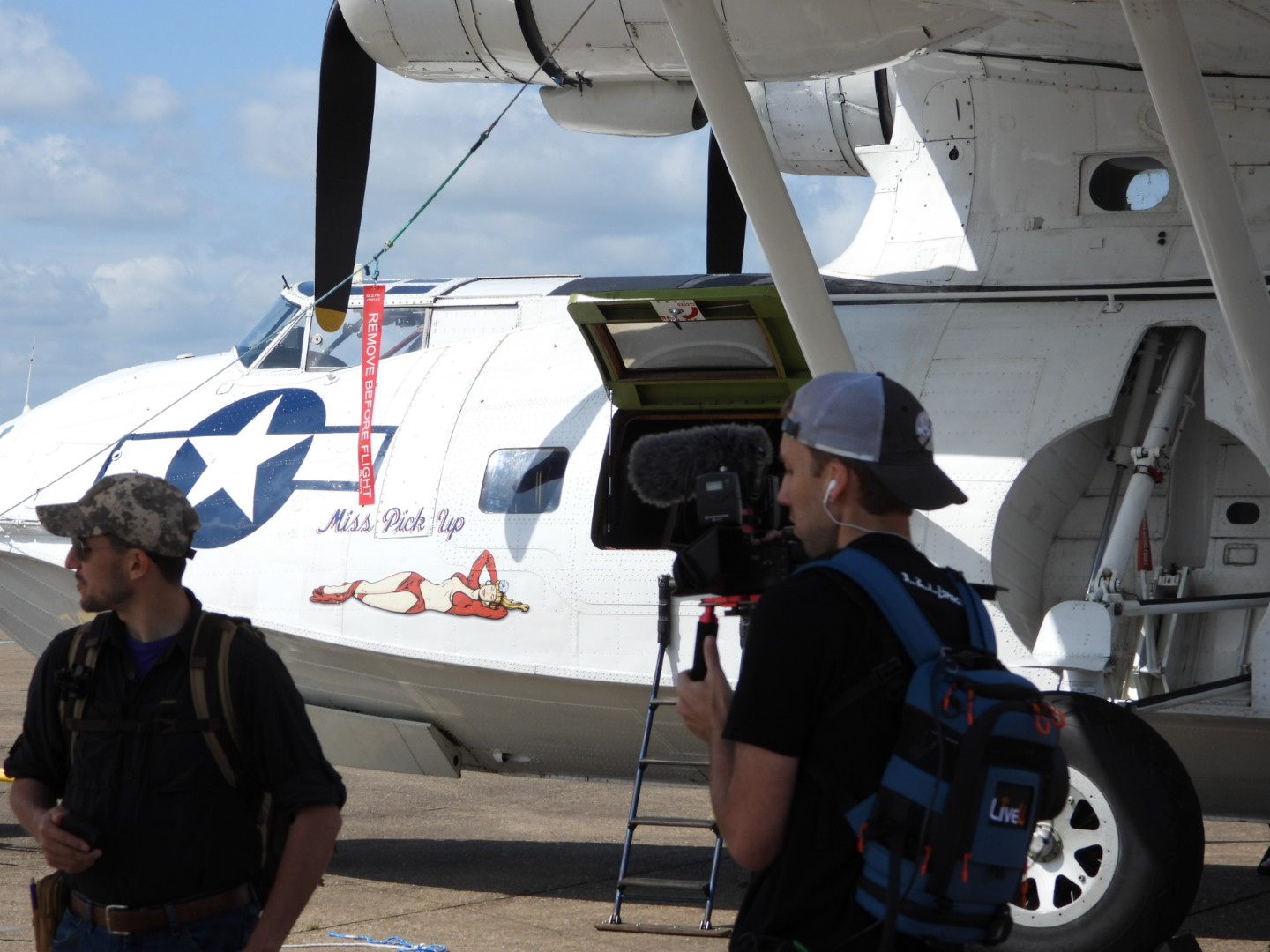 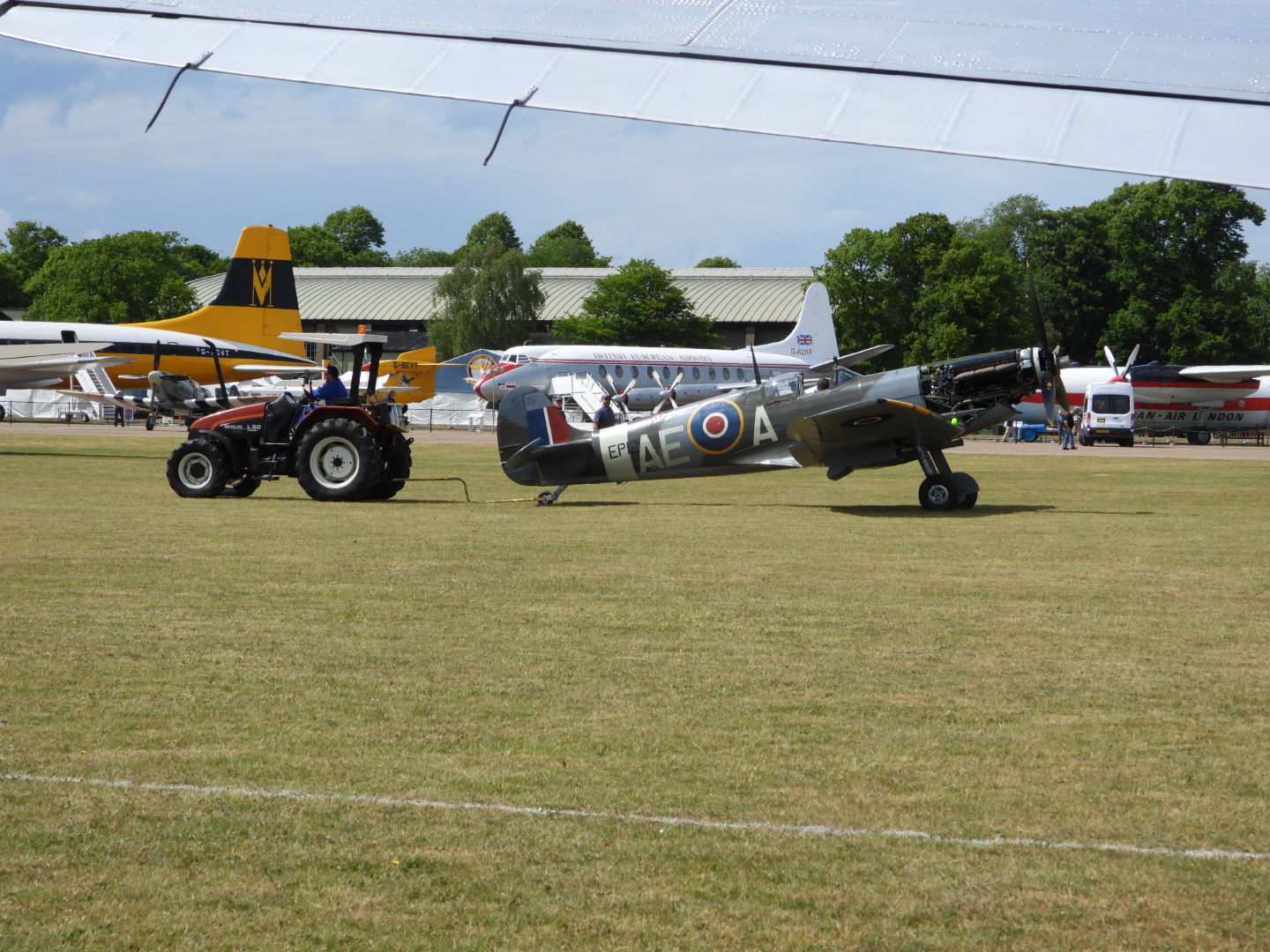 Julia didn’t waste any time in getting us off to a roaring start. We felt pressure to find something really good right away, as Twitch was featuring the VFT on its front page starting right about the time we arrived. This meant we had to not only be on the air and streaming, but also needed content that would draw viewers in and keep them watching.

Knowing this, Julia took off like a shot right when we exited the main building onto the airfield. Within minutes—literally—she’d already talked with ground crew manning the airfield and gotten us access out to one particular plane – “That’s All Brother,” a beautifully restored C-47 that, as it turns out, was literally the first airplane across the English Channel on D-Day. That it somehow ended up rusting in a random boneyard and was then restored to near-mint condition is a fascinating story. The clip below includes part of that story as well as the intro to our livestream that day.

We ended up being the only broadcasting crew out on the flight line that day--and the next. On Day Five we would learn that Duxford had capped the day’s event at 10,000 visitors, and 9,996 of them were on the opposite side of the fence from us (more about that in my next post). It gave us an up-close view of what is, truly, a one-of-a-kind historical artifact and story. “That’s All Brother” looks like she just rolled off the assembly line. She also has the black and white “liberation stripes” (a crew member later that day corrected me emphatically when I referred to them as “invasion stripes,” as the D-Day operation was an effort to liberate a continent, not conquer it) painted on her wings and fuselage; all aircraft that served in D-Day operations sported these stripes to identify them as friendlies to Allied troops and aircraft. It was easy to see, in my mind’s eye, her lined up with dozens of other C-47s as equipment-laden airborne troops boarded her for the short but nerve-wracking flight across the Channel. 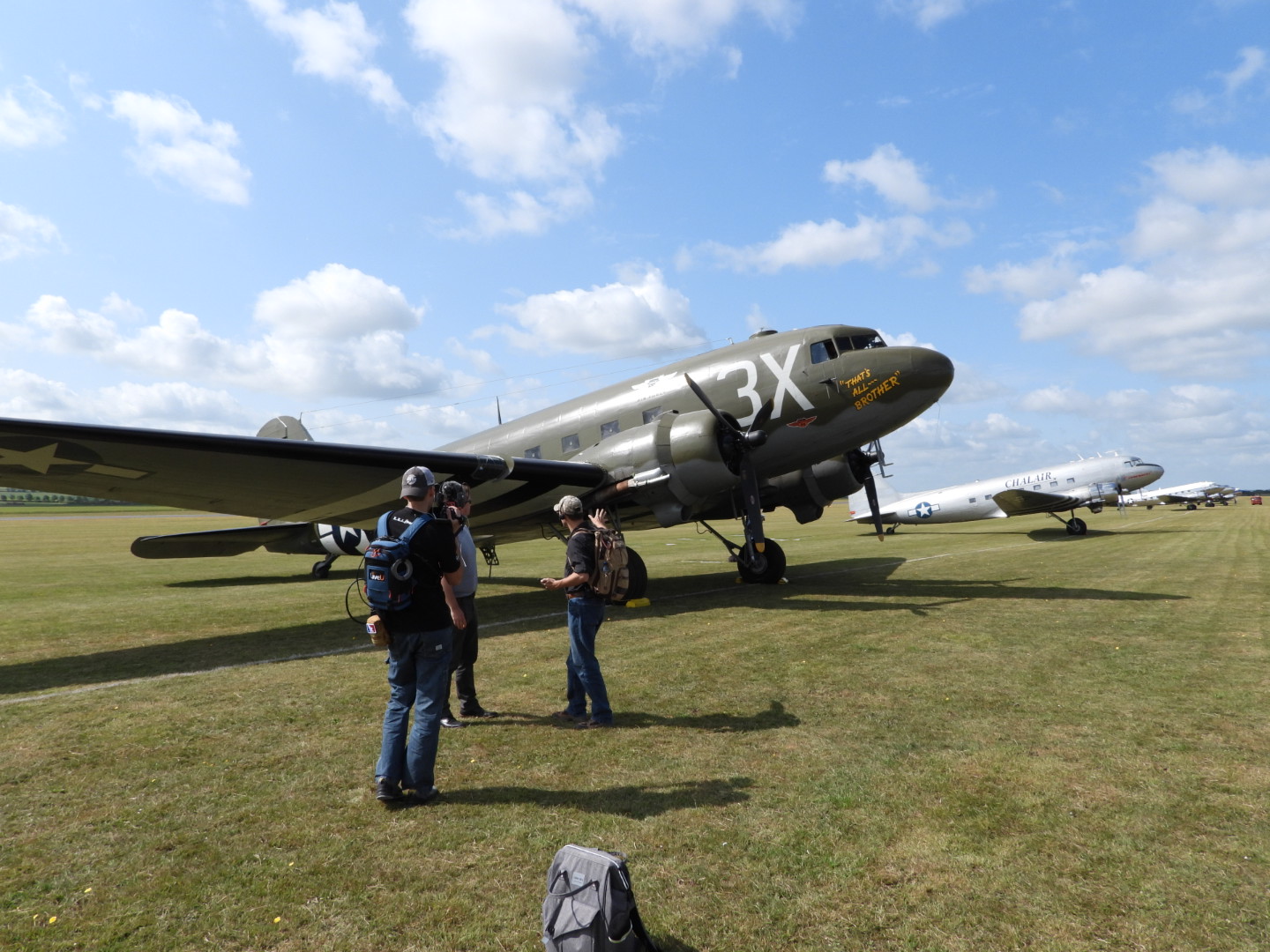 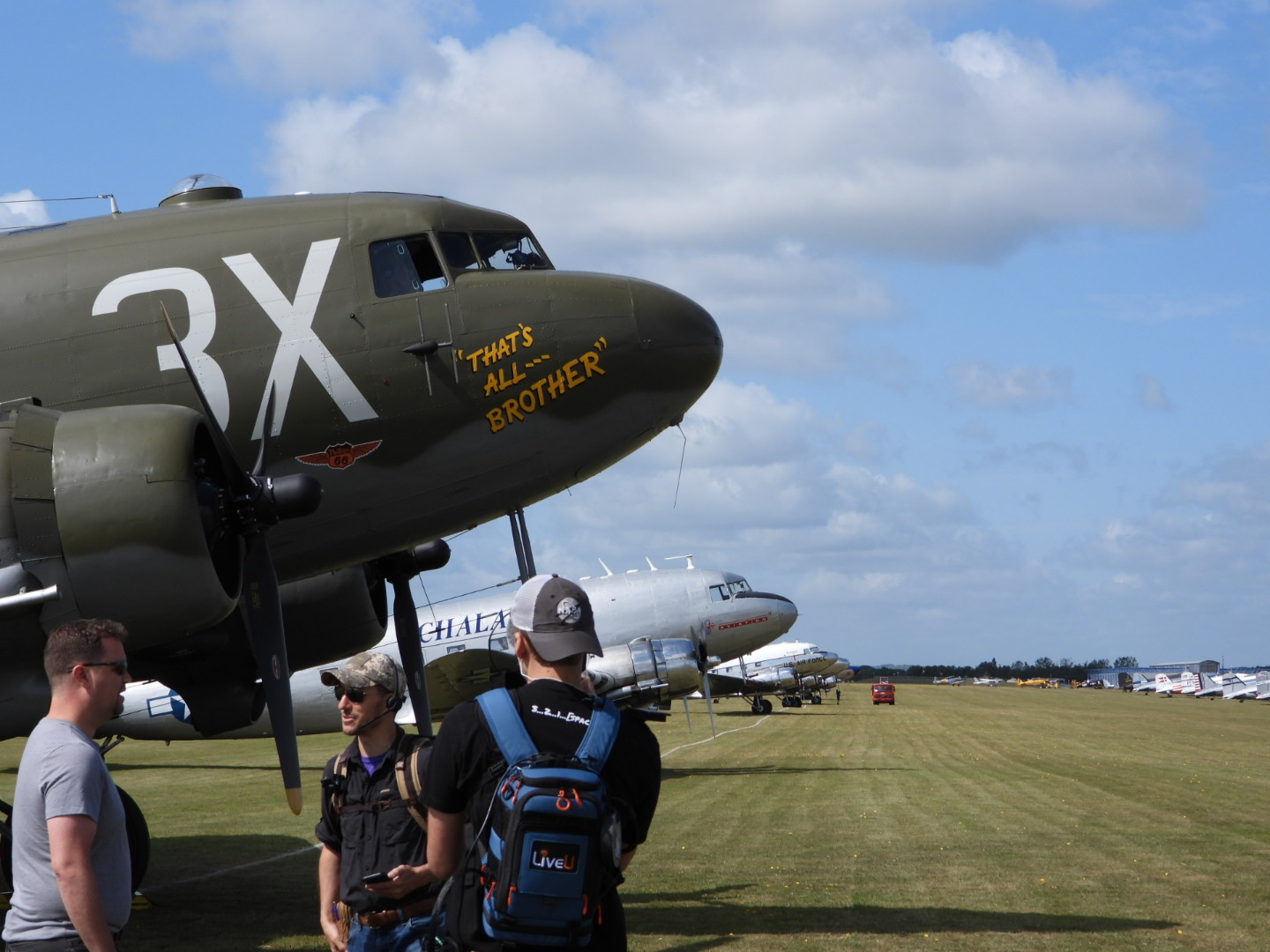 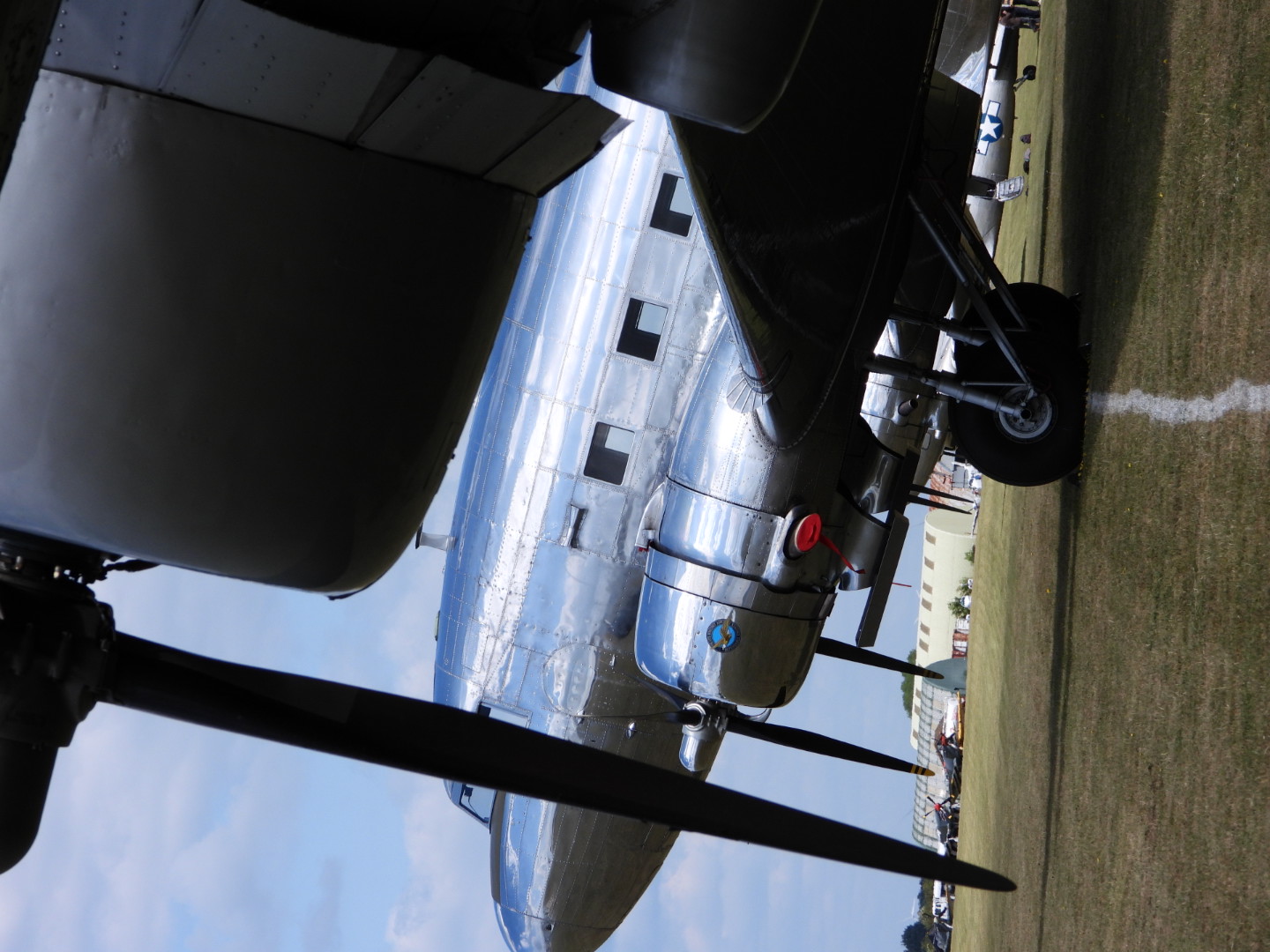 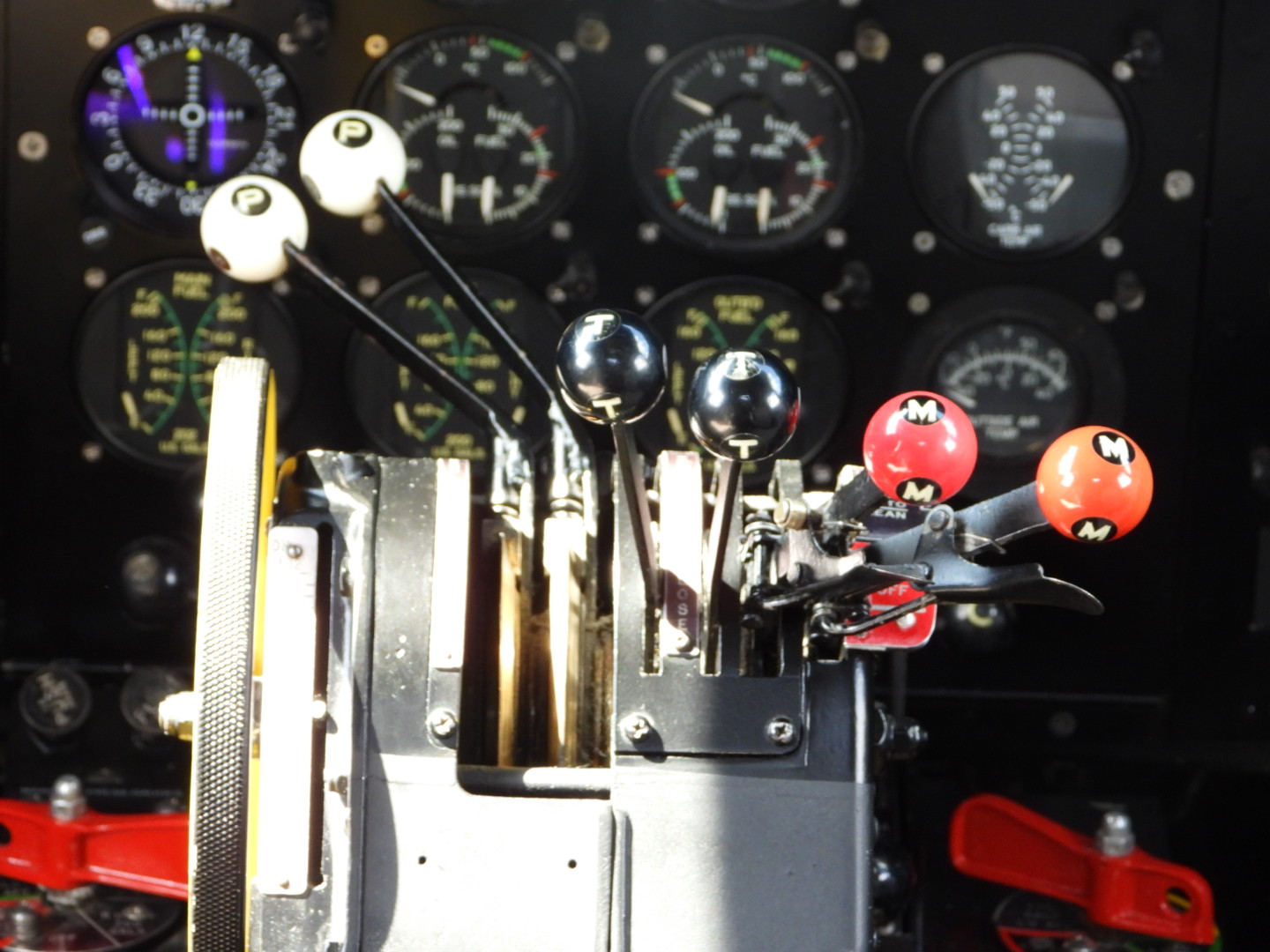 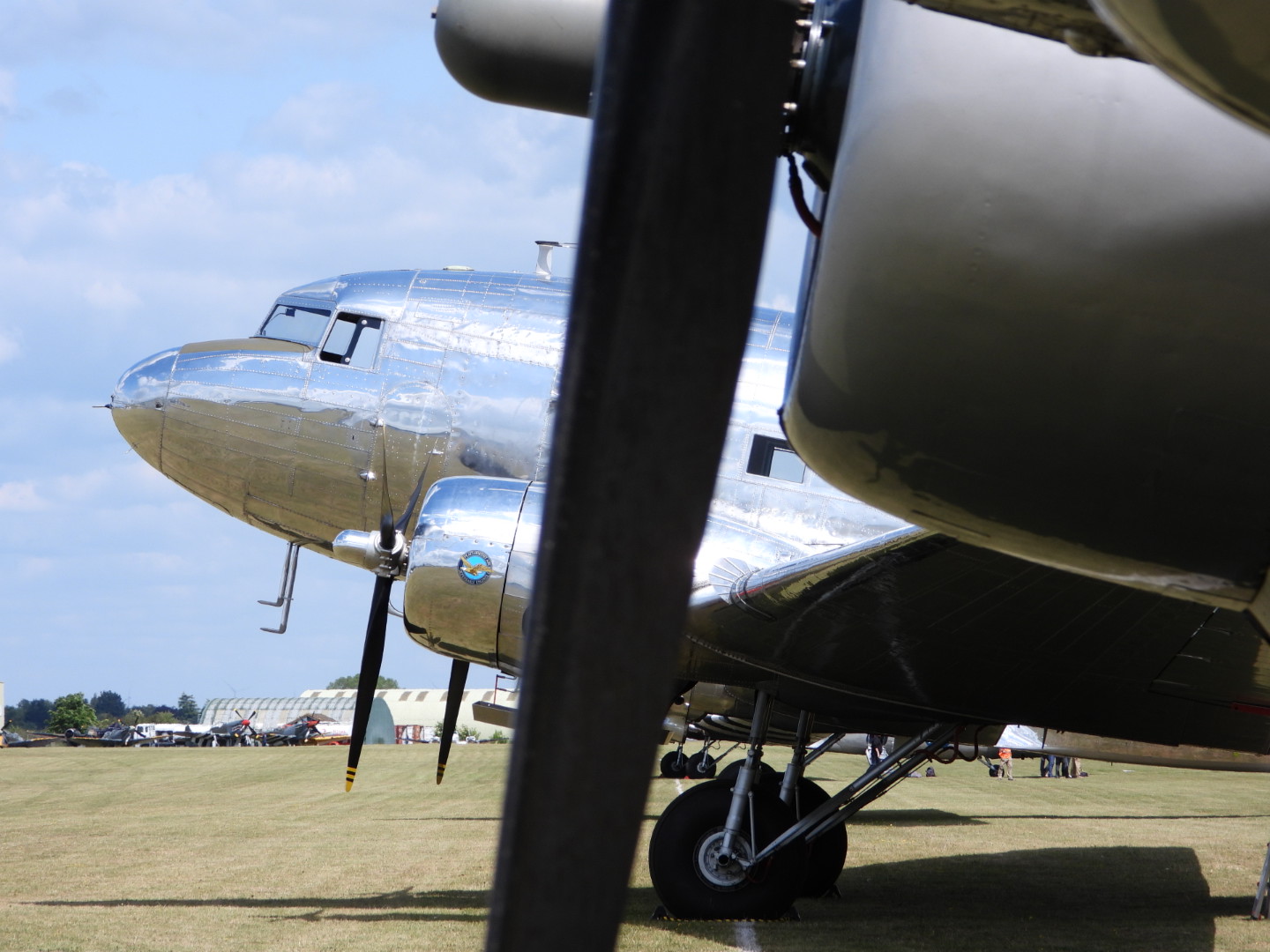 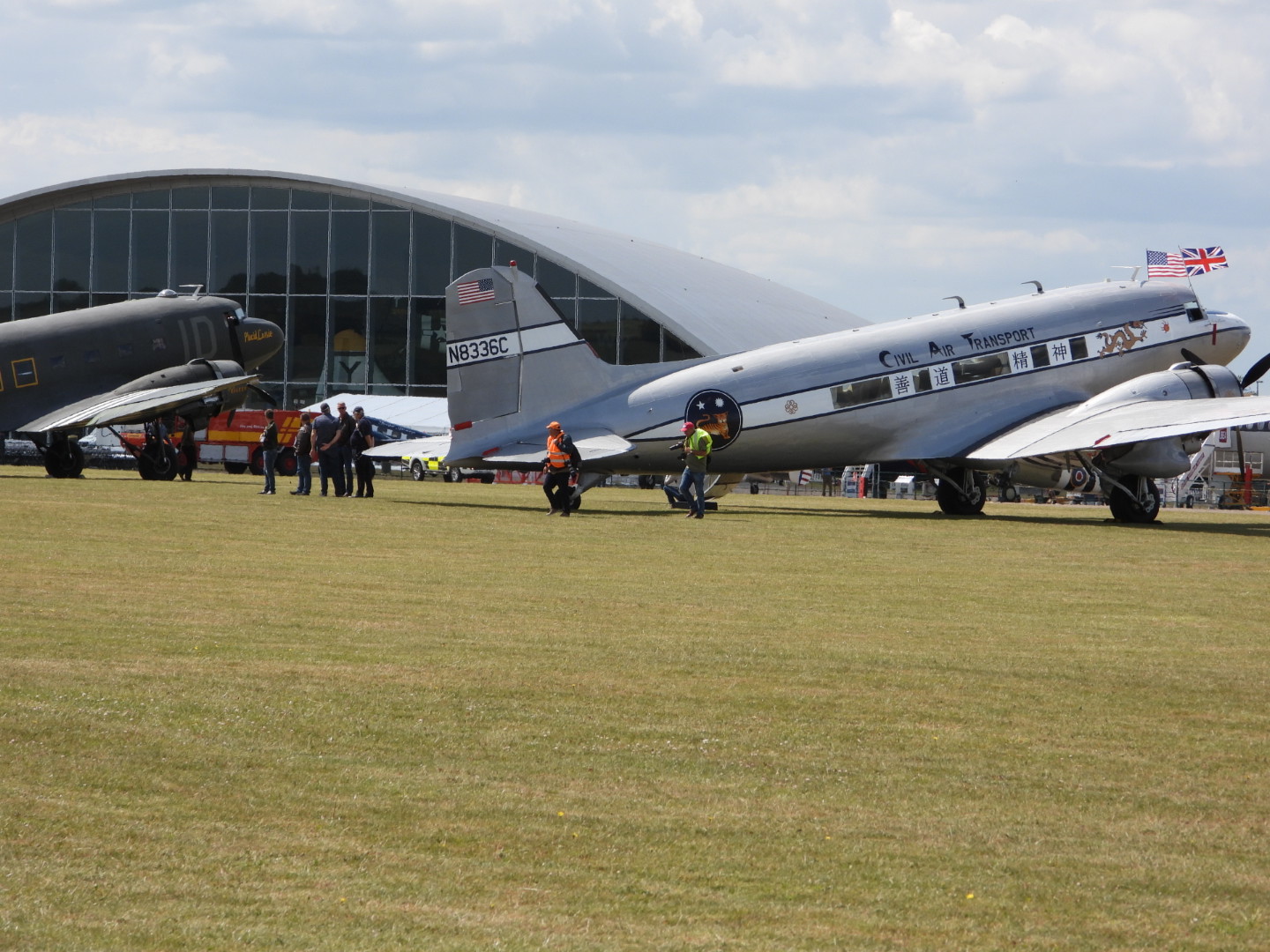 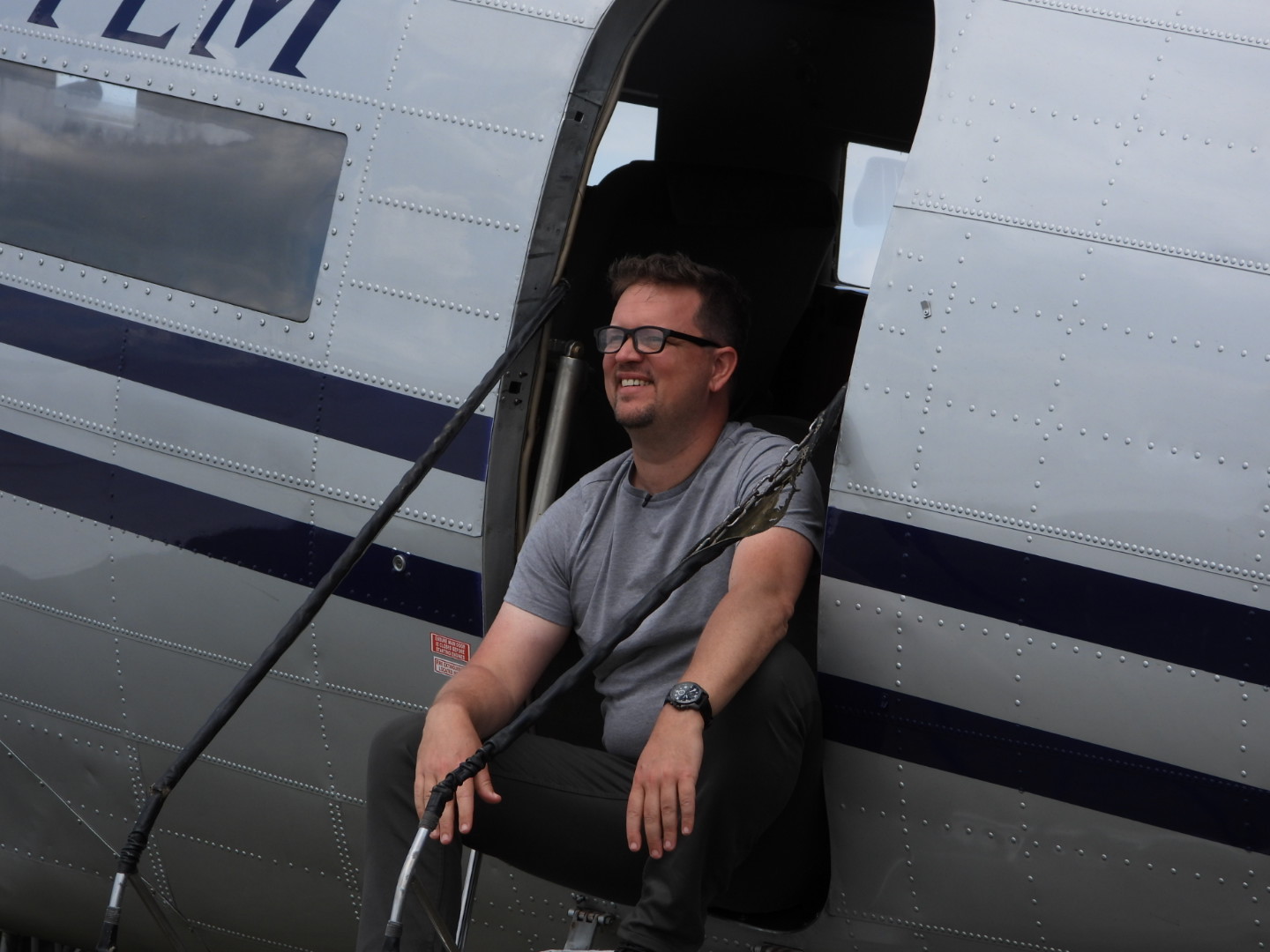 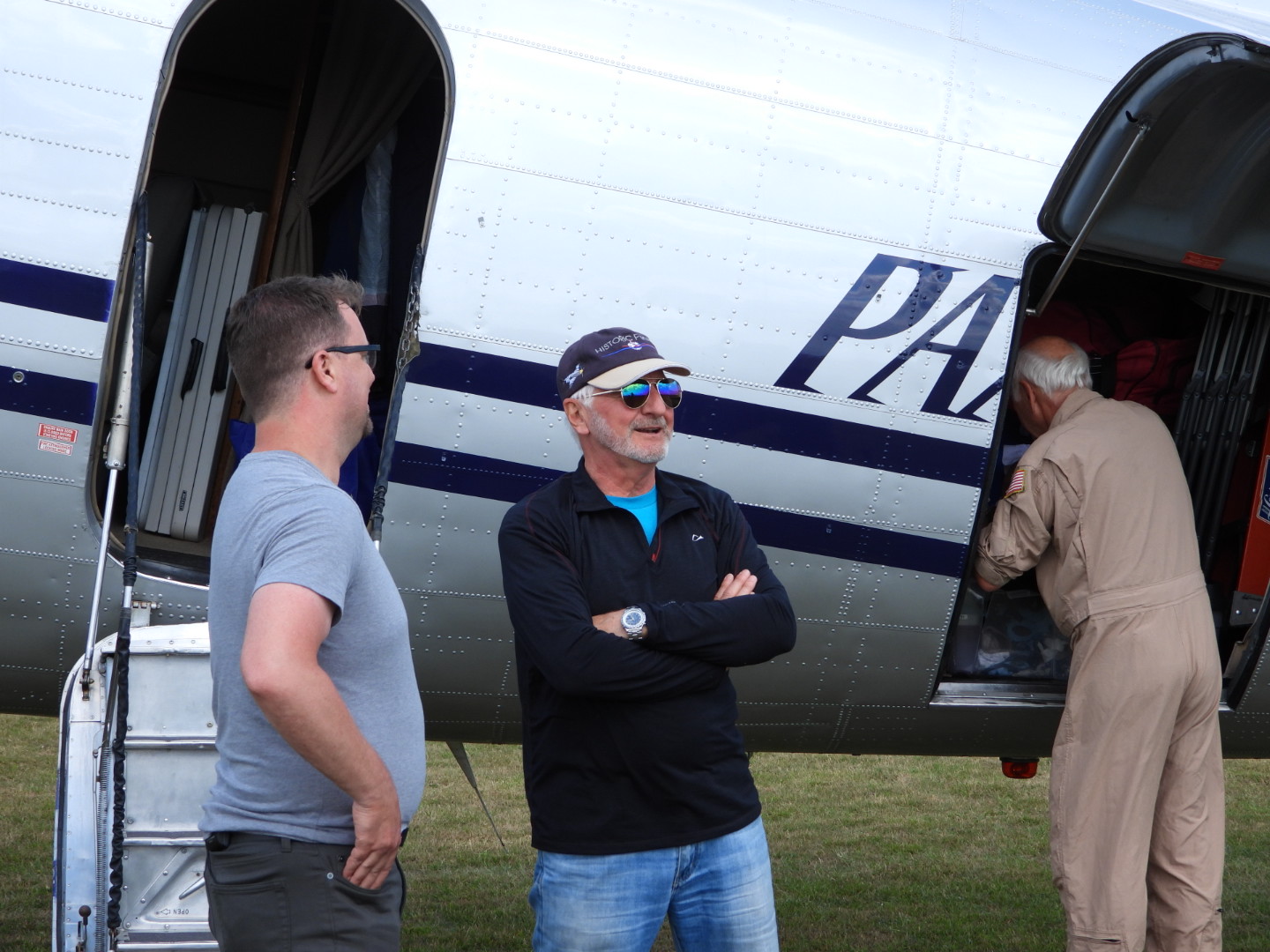 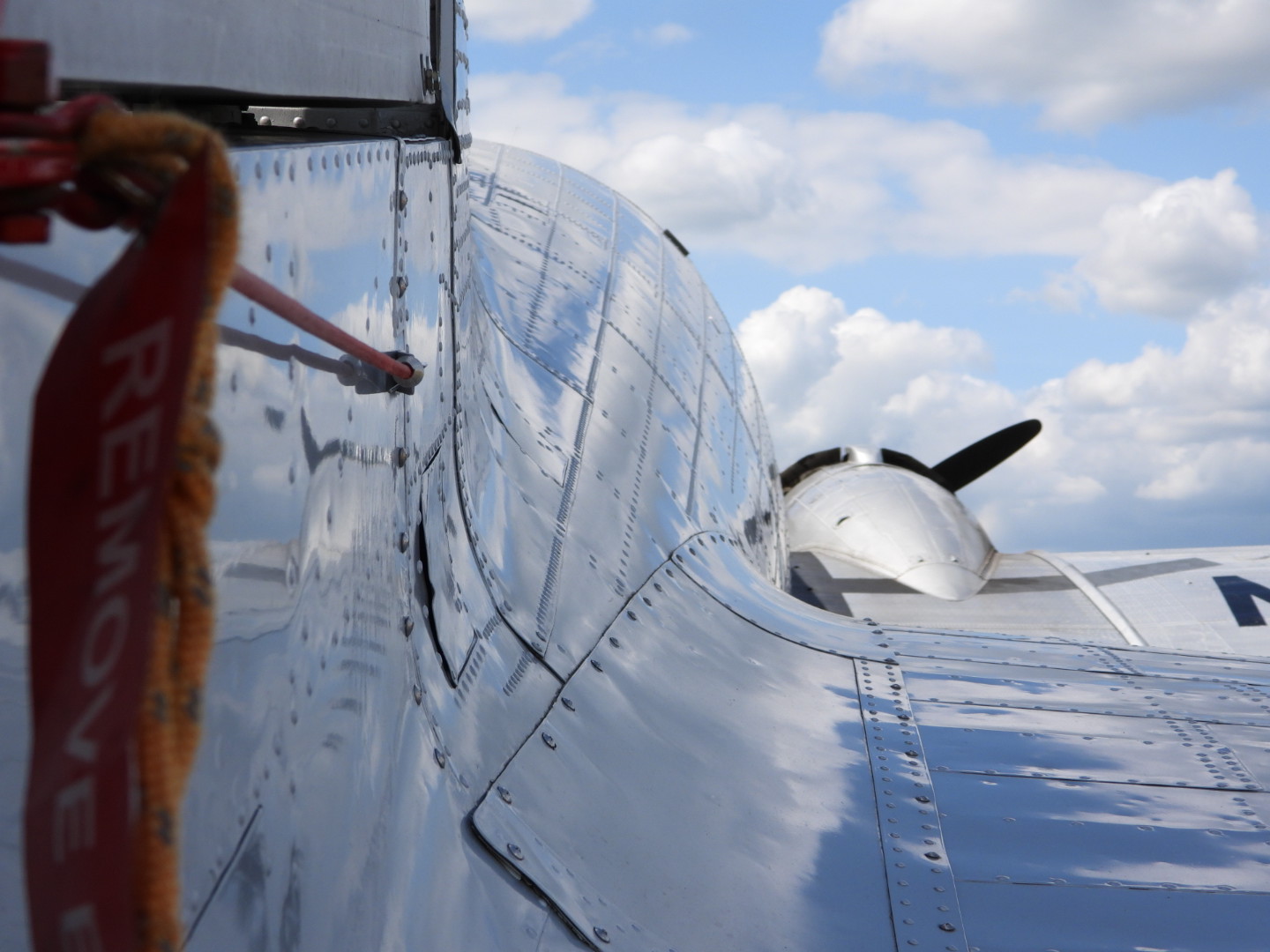 Starting out the day with “That’s All Brother” drew in viewers by the thousands, and many stayed on for hours more, while others jumped in later in the day. With the time change, viewers in North America were still asleep when we began the livestream, so many of our live viewers early each day were in Europe and Asia. By the time we finished our initial visit with “That’s All Brother” about thirty minutes later, everyone on the team had a sense we were onto something special. Unlike news agencies that wanted to film and cut footage into short sound bites for newscasts and website clips, we could interview people for however long they wanted to be interviewed. We could get close up looks at the gathered planes inside and out because of the compact mobility of our livestreaming equipment—literally it all fit in a backpack (wow, LiveU, wow) with a camera about five times smaller than an average news camera. Combined with Julia’s top-notch wrangling and the clear enthusiasm we all had for the subjects and individuals we covered, what we had was a unique avenue to coverage no one else was getting.

The shake-your-head-in-amazement-and-outright-geekery opportunities just kept rolling in all day. We spent over two hours inside the Historic Flight Foundation’s DC-3 with volunteer pilot Gene Vizetti, who took us into the cockpit and discussed all manner of subjects on the operating systems of the plane, including how a pilot would fly it if one engine went out (this would be very useful for the next day, as I’ll talk about in my next post). We also got to crawl into a beautifully restored PBY Catalina and talk with its pilots and crew about its role as a reconnaissance and rescue aircraft. We then finished the day by going through the excellent exhibit of tanks and other armored vehicles from throughout British history, with Das making references to “World of Tanks” the entire time—to the delight of our viewers and commentators on Twitch Chat. Video Game Nerds Stand United. 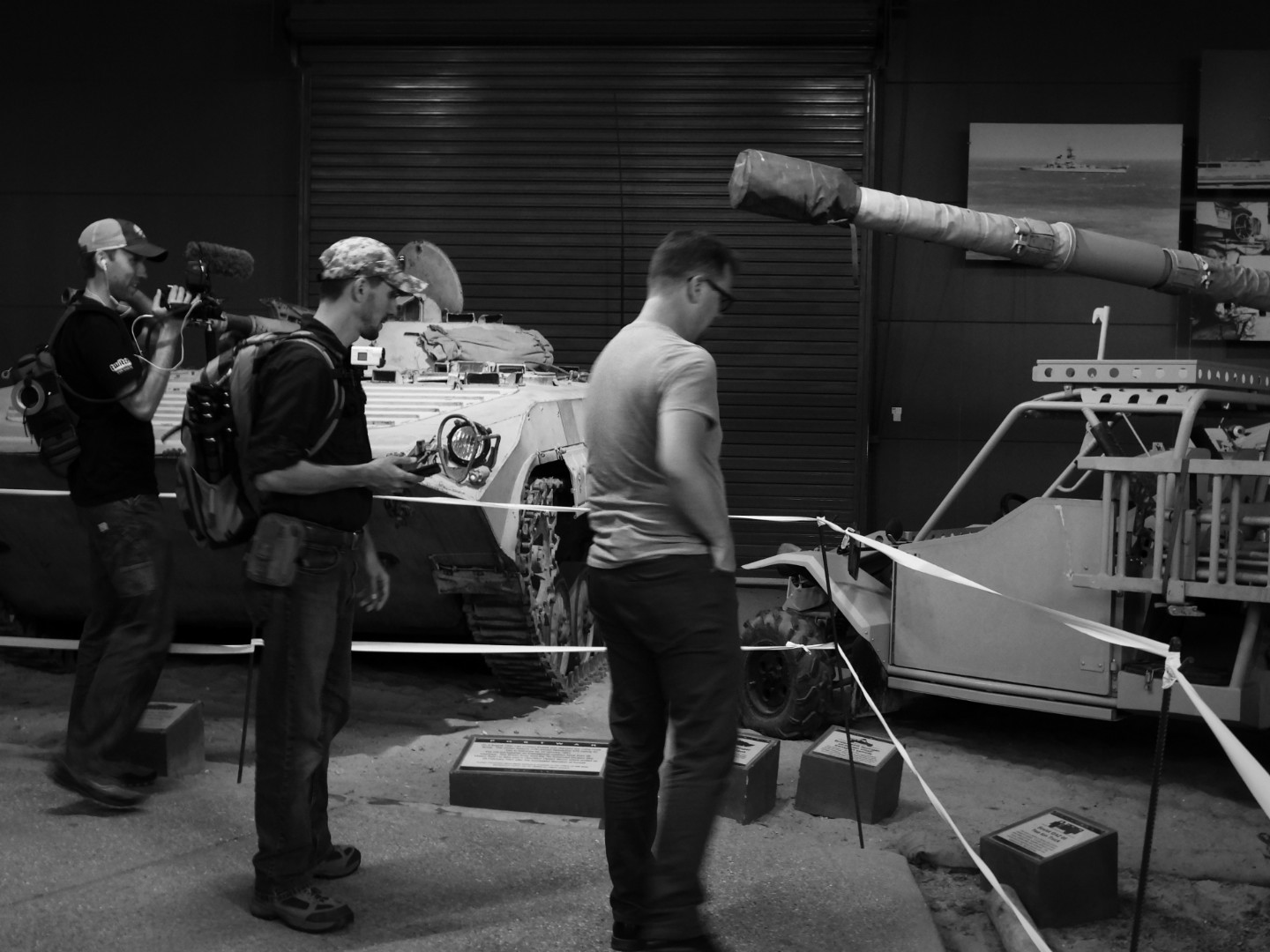 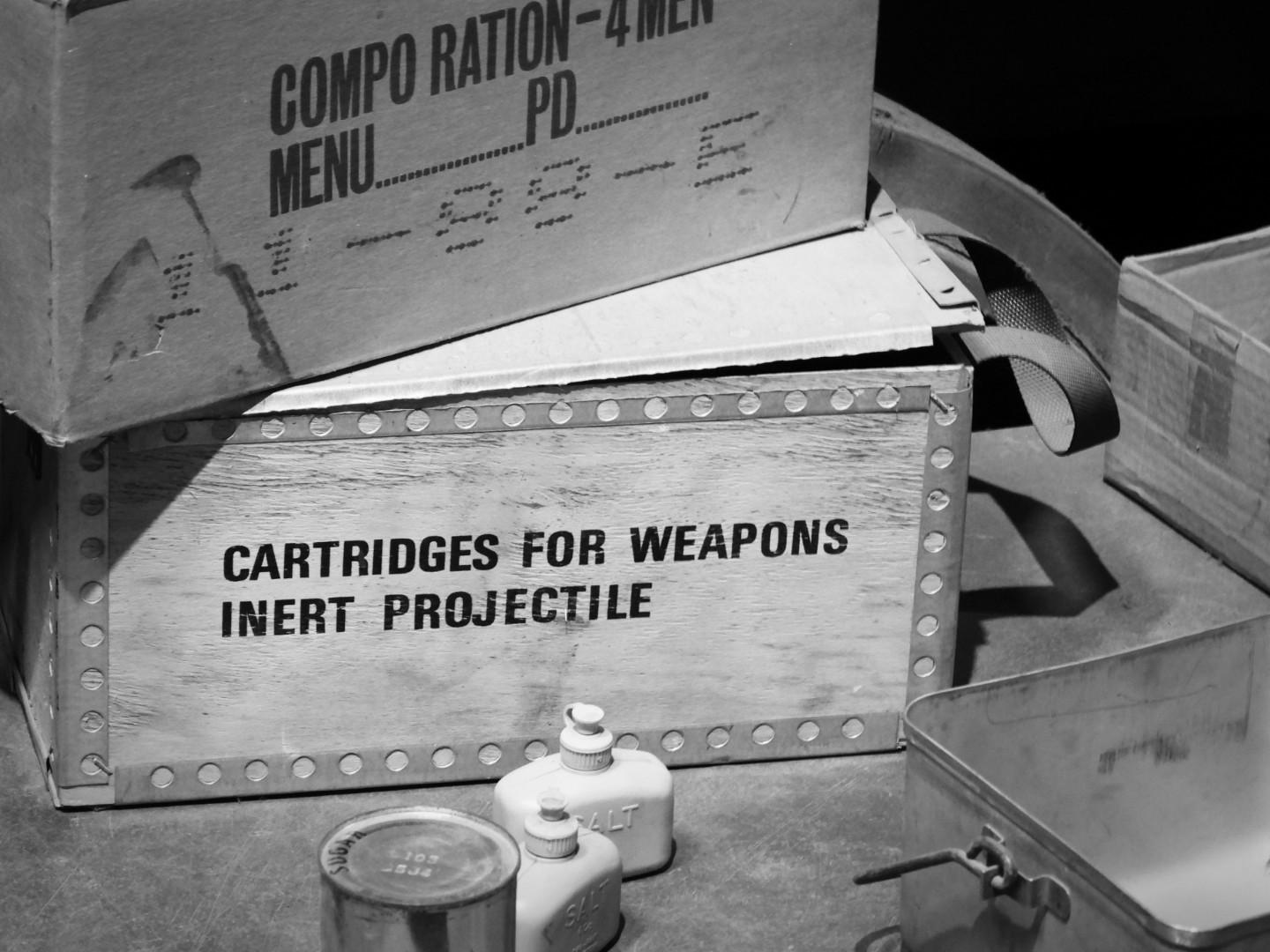 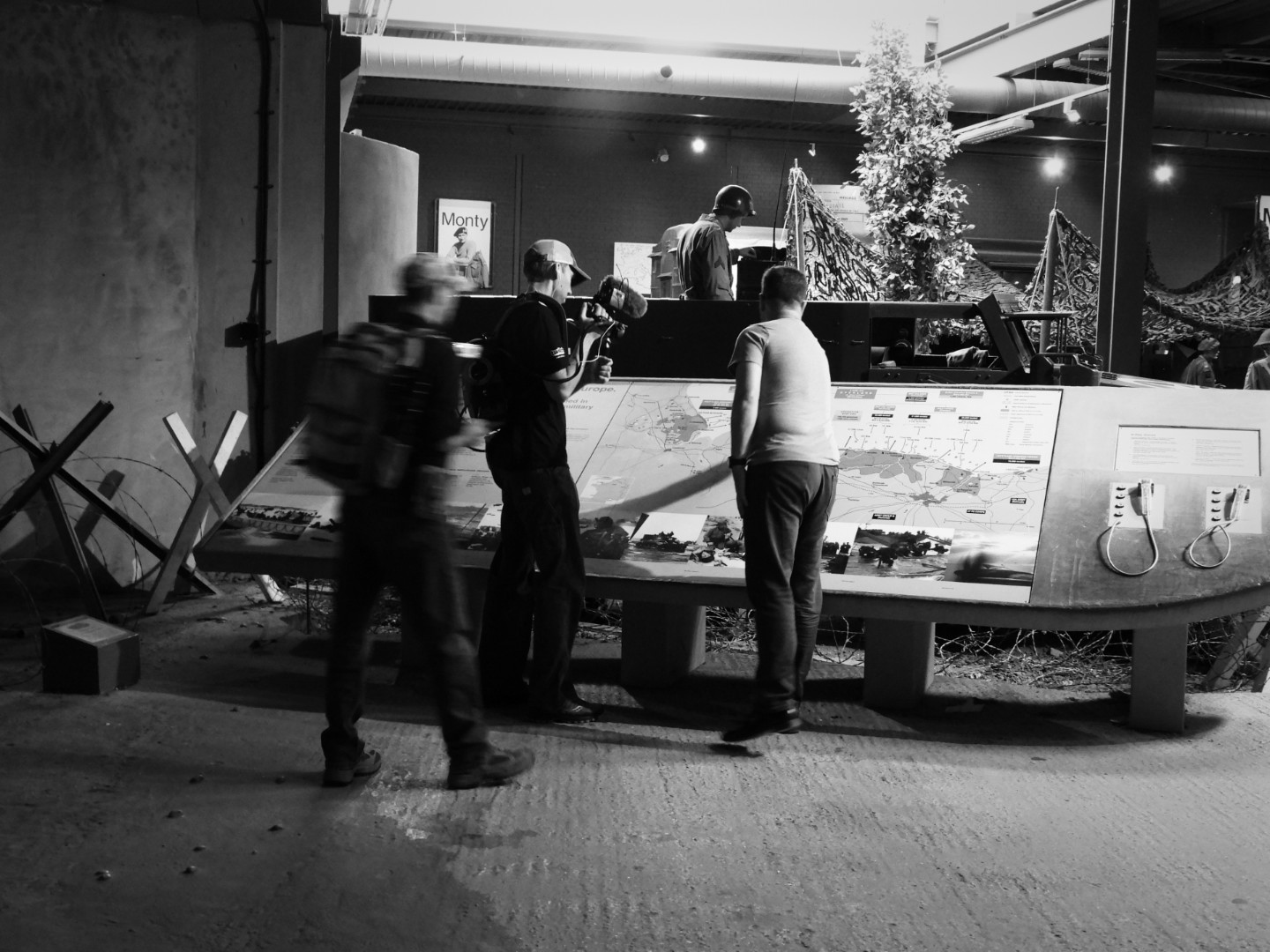 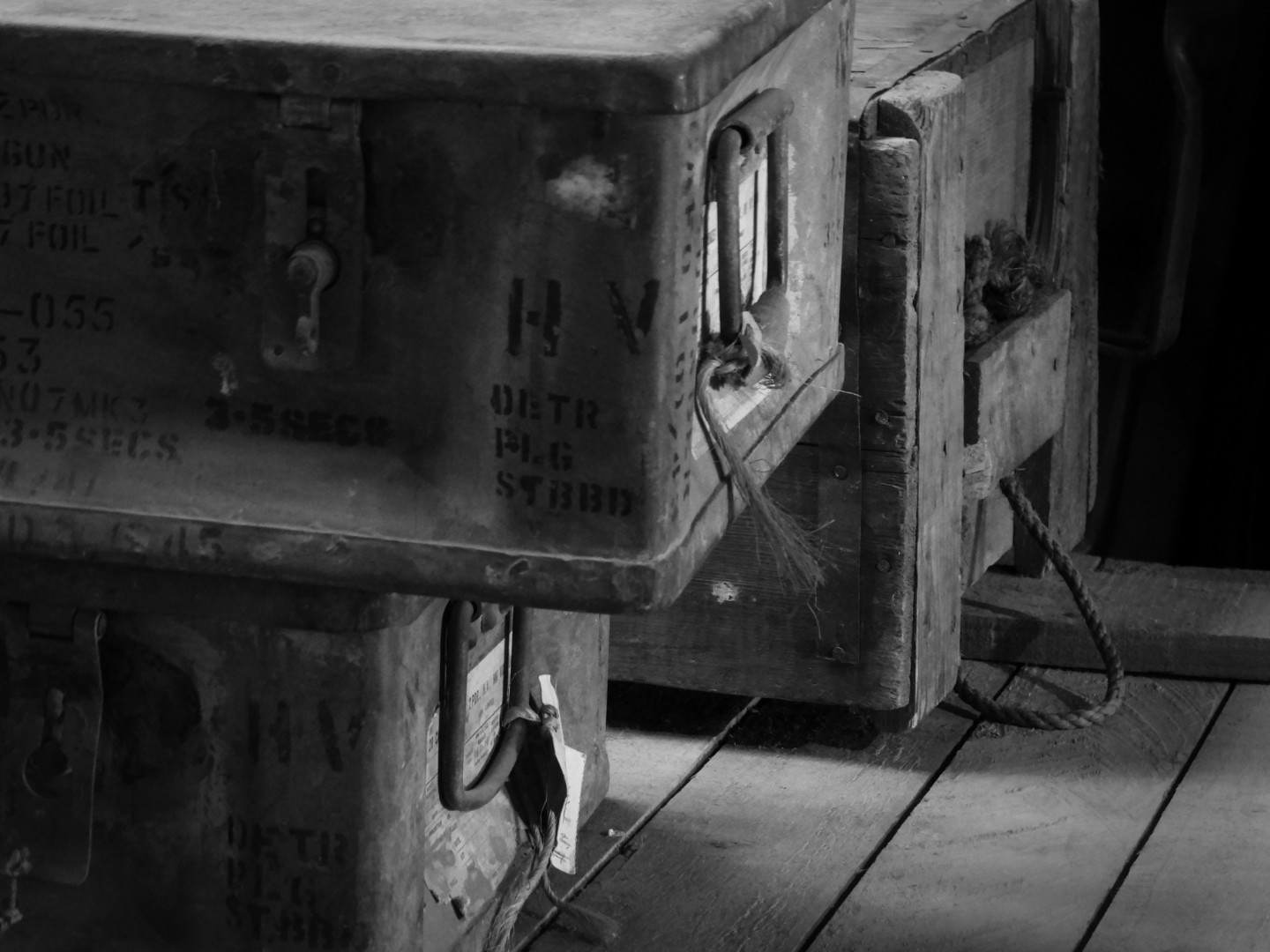 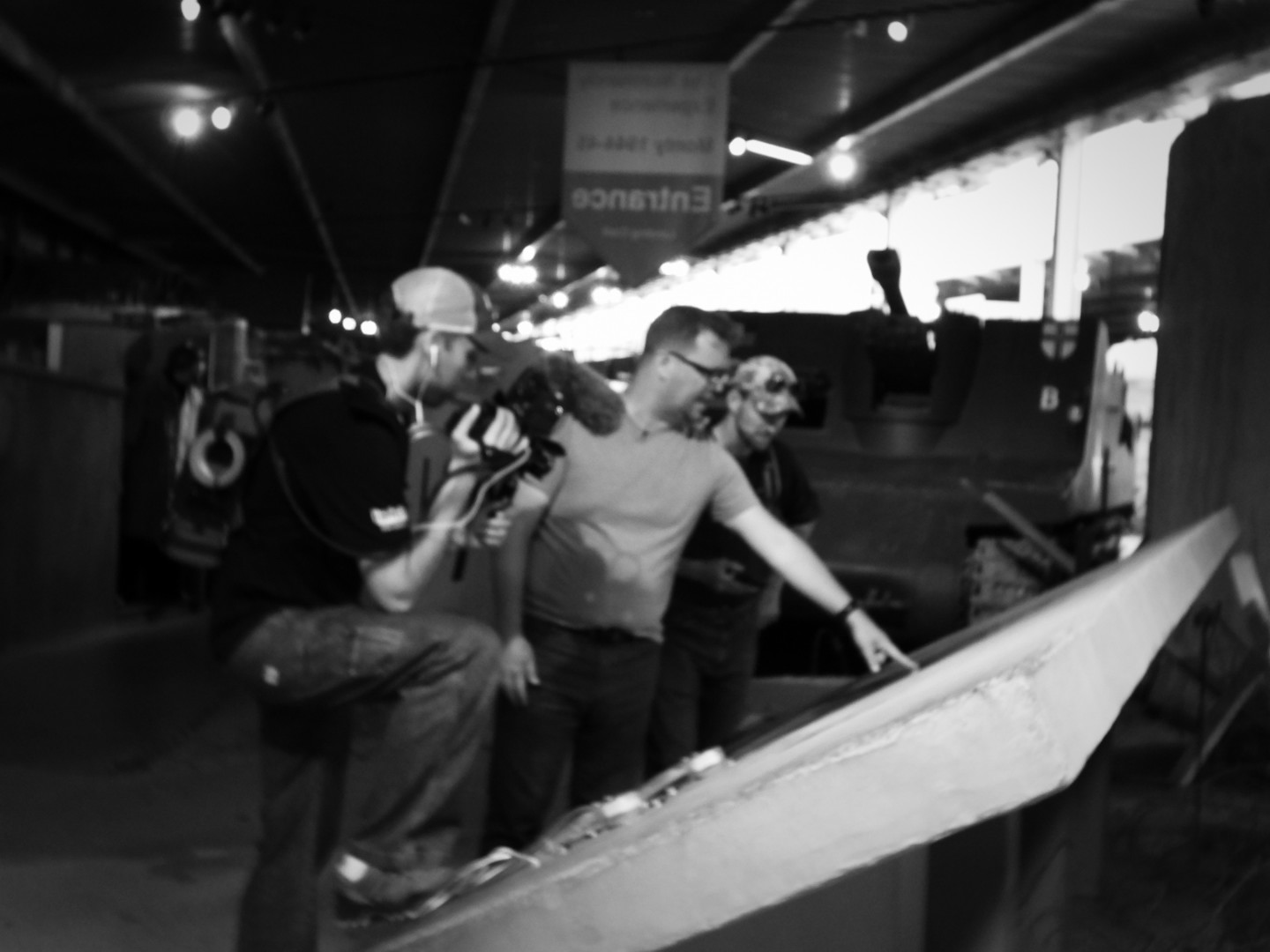 In the middle of all of this activity, I stepped away at one point to do an in-person interview with Mark Stay of the popular “Bestseller Experiment” podcast about my book and the process of writing alternate history fiction as an academically-trained historian. With Spitfires and other fighter planes doing rollovers and dives and other way-cool stuff over our heads, Mark and I talked about a number of topics that should, I hope, make for an interesting podcast for him and his listeners when it appears later this summer (I’ll make an announcement all over the place about that, don’t worry). I remain grateful to him for the time and opportunity, and if you get a chance to check out his podcast, please do so--his story is incredibly cool and inspiring.

As I reflected on the day after we finished up, what tied it all together for me was the deep love everyone we encountered that day—including ourselves, frankly—had for whatever it was that had drawn them to Duxford for the D-Day commemoration events. The air crews of every C-47, DC-3, and other planes gathered there keep them in flying shape, and flew them from all across the world (no easy task) because doing so is a deep labor of love, a passion imbued with a powerful sense of responsibility for preserving the history of D-Day and the Second World War. I love teaching history for the same reasons, and it’s why I wrote Krelle’s Inferno and loved every second of it. That same labor of love is what drove Julia to make the seemingly impossible happen on every day of the trip, what drove Das to ask fantastic questions in his interviews and marvel enthusiastically at everything we learned, and what motivated Saber to work through incredible muscle fatigue to provide amazing video quality that could’ve been taken from a veteran BBC cameraman. Based on the reactions from our viewers, everyone’s love for their work was evident, and it drew the audience in and taught them things they never knew they didn’t know—which was the entire point of doing the VFT in the first place.

The only low point in the day was the terrible sunburn I incurred from being That Guy who forgot to put on sunscreen. It earned me some concerned (and mocking) messages from my friends, followers, and Chat, along with a reverse raccoon tan on my face and two “commemoration stripes” on my upper arms that marked my new championship-level farmer’s tan. I’d say none of us were expecting sun that day, but no one else got sunburned, so ... yeah. The next day I would overcorrect and overapply--needlessly, as it turned out. But despite looking like a lobster on my face and arms, it was a more-than-acceptable trade off for a day where everyone’s labors of love ended up on full display to such profound effect.

We were off and rolling, feeling good about our prospects for similar quality content going forward. Little did we know just how much the next day would go to another level. Come back soon to read about it. Keep loving your labor as best you can in the meantime.

I Live in Kirkland

A Voice (Do) Over

Come on in and see what I'm talking about, and for a teaser on a big announcement!